What is the truth?  There are a couple of excuses for saying this has a grain of truth.  One is that anybody can send off a picture to Zazzle.com, say of your new baby, or cat, or some mysterious Arabic writing, and Zazzle.com will produce a real usable stamp.  E.g. 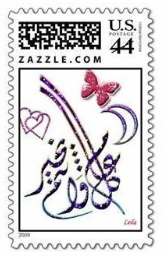 which was the image used in the email that I read.  See http://www.snopes.com/politics/stamps/eidstamp.asp.

The email says it is the second time a stamp honoring an Islamic holiday has been issued, leaving the reader to assume Obama "ordered" the previous one.

Actually, Snopes tells us there was a real stamp issued to honor an Islamic holiday.  It was issued on September 1, 2001 as part of a series of Holiday Themed Stamps, including ones of Hanukkah and Kwanzaa which turned out to be very bad timing.  If any president was responsible it was the then current president GW Bush.  According to Snopes, the Holiday Series is still reissued from time to time, and nobody has seen fit to exclude the Muslim one.  Apparently there were 4 reissues under Bush, and 3 under Obama.

How widespread is this misinformation?  At the time of writing,
Google { "Stamp  Celebrates a Muslim holiday" } ==> 33,000 results
I assume mine will be among them sortly, but see how long it takes you to find one of these links that isn't repeating the story as gospel.

I have been checking out emails like this for a couple of years, since my mother started forwarding them to me.  Nearly all the ones she forwards contains elaborate deceptions just as this one does (there are a lot of jokey emails that don't claim to reveal some new fact, but she sends the ones that do make some shocking claim).

My observations of such emails are summarized in My Not-really-right-wing Mom and her adventures in Email-Land.
Posted by Hal Morris at 5:36 PM