"We Will Shoot More Police in Arizona" and Other Email Idiocy

Have you seen this picture, accompanied with a caption somewhat like the following? 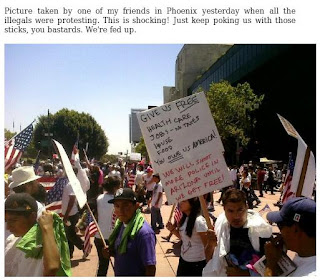 It is part of a very big phenomenon I described in My Not-really-right-wing Mom and her adventures in Email-Land.  There is also a web site called "My Right Wing Dad" devoted to simply collecting thousands of such emails.

The picture by itself means little or nothing.  The signholder could be as uniquely crazy as Jared Loughton (see "Crosshairs, Blood Libel, and Rabid Partisans");  for that matter, it could be a liberal-baiter who wrote the sign himself.  The sign-holder looks like he's talking with someone, maybe the photographer ("OK you want me to hold it a little higher?").  The sign itself reads like a parody in my opinion, but consider this: if the sign holder was truly one of the protesters, and spent any amount of time displaying it (as opposed to posing once for the picture), why haven't multiple pictures of this outrageous sign appeared?.  If the sign represents the views of the marchers, are there pictures of any others with similar messages?

Why does is matter? Why are millions of people passing this stuff around?  As to what motivates it, I believe the philosophy goes back at least 30 years to what Terry Dolan, one of the founders of NCPAC, said of their strategy:


"A group like ours could lie through its teeth, and the candidate it helps stays clean.". Washington Post, August 10, 1980 (quoted by Wikipedia).

The power of PACs, and of skunkworks of "dirty tricksters" is truly wondrous.

An indispensable element of these emails, which I've been studying for a couple of years, is the phony folksy lead-in which gives the impression this was just passed along by a "concerned" friend of a friend, not from some junior Machiavelli in a boiler room somewhere.

Various tricks are used to "prove" authenticity, not the least of which is the manufactured outrage -- as in another of the variations cited by http://www.snopes.com/photos/politics/azprotest.asp:

I know john personally! THIS IS LEGIT!
The photo was taken at a protest 5/1/10 in Phoenix!
(as noted, the backdrop is the LA Times bldg which is NOT in Phoenix)


I for one am OUTRAGED by this photo, taken the next day after a Pinal County Sheriffs Deputy was shot by Mexican Drug Runners with an AK-47 just a few miles from my home.  THIS CRAP IS TAKING PLACE "IN MY BACKYARD"! YOU PEOPLE in other states Need to shut the hell up, and actually READ THE PROPOSED LAW for yourselves, and NOT LISTEN TO THE RACEBAITERS like Sharpton and OBAMA!

READ IT FOR YOURSELF THEN DECIDE IF IT IS RIGHT OR WRONG!!!!

I have about had enough.

Why do I say "manufactured" outrage?  In this case, there is the lie of personal knowledge that the photo was taken in Phoenix when in fact the scene is Los Angeles.

If you are not one of the people who swallows this sort of thing whole, let me just say that these things are effective.  They get past peoples skepticism because they seem so amateurish, like somebody just got fed up and in impotent rage, put it all together and sent it out to his or her little informal club of people who exchange interesting emails.  But when most of the emails like this I've seen contain elaborate deceptions (See "My Not-really-right-wing Mom and her adventures in Email-Land") it makes more sense to think the composer was interested in changing public opinion for a certain political result, not in sharing their genuine personal outrage as they claim.