What about me, Donald Trump? 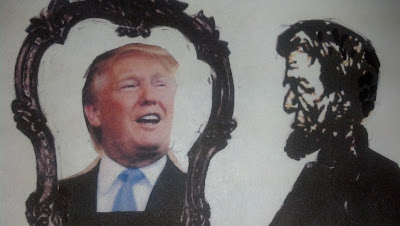 Long before he was a senator, Al Franken was a Saturday Night Live player whose special role was that of a cheerful clueless narcissist.  His sketches were monologues; he would be posed behind a desk like a serious pundit, addressing the serious issue of the day.  Then he would  pause, and say

"Now I know you're wondering what does this mean for me, Al Franken?"

That was the running joke, the monologue just kept coming back to "what does this mean for me, Al Franken?" - maybe you had to be there.

He sort of kept drawing on that basic character throughout his career as a comic, including his first book I'm Good Enough, I'm Smart Enough, and Doggone It, People Like Me!: Daily Affirmations ....

Then in 1999 he wrote Why Not Me? The Inside Story of the Making and Unmaking of the Franken Presidency.  It seems he had a political passion, and a way to express it, and the rest, we might say, is history.  He tried to influence opinion with the unsuccessful Air America radio network, then saw a chance to contest a GOP senate seat, and won it after a couple of months of vote recounts.

What About Me, Donald Trump?

Donald Trump's efforts at making a difference in the political world have consisted most notably of several considerations of becoming president or governor of New York, and as for policy, his very vocal accusations that Barrack Obama was born outside the U.S., and that Obama's Columbia grades (which neither Trump nor the public had seen) weren't good enough to get him into Harvard Law School.  He strongly backed Obama's 2009 rescue of the auto industry, and hinted that vaccines cause autism, and denigrated climate change concerns.

That seems kind of all over the place.   What about the key themes of his career thus far?  Perhaps I'm missing something, but they seems to be

As a candidate, his positions seem opportunistic. Is he really stupid enough to be a birther, or was that just a way of getting attention (see item 3 above)? Now, as a presidential candidate, he gets plenty of attention by saying one  inflammatory and extreme thing after another.  Then for variety, he sometimes sits down with a journalist and sounds candid, as if he's thinking things out. This too is probably a pose.

Why is he running?  Maybe he woke up thinking "Why not me?  I've done all these important powerful things, why not be president?"

What does he think he would do with the presidency? Something audacious, no doubt, and most likely reckless, because that's the kind of guy he is.
Posted by Hal Morris at 9:36 PM 1 comment: